Biofuels for cleaner skies of India

Sustainable Aviation Fuel (SAF) produced from agricultural residues will not only contribute to environmental solutions, but also will help to improve the rural economy. However, since the cost of SAF is significantly higher than that of the ATF, policies are required to play crucial role in SAF commercialisation in India.

At COP26 Glasgow last year, Indian Prime Minister announced that nation will achieve Net-Zero by 2070. This is a watershed moment in India’s fight against climate change. To achieve this, India’s civil aviation sector is required to reduce emissions of around 20 million tonnes per year. Additionally, the sector must arrest future growth in emissions. This is particularly challenging, as aviation is one of the fastest growing sectors in India and is projected to be the third largest aviation market by 2024.

The agenda of decarbonisation of ‘hard to abate’ aviation sector has been at the forefront of Climate Change mitigation strategies across the world. Recently, in its 41st assembly, International Civil Aviation Organisation (ICAO) announced the Long Term Aspirational Goal (LTAG) to achieve Net-Zero by 2050. This historic announcement will put the international aviation on the path of sustainable future. 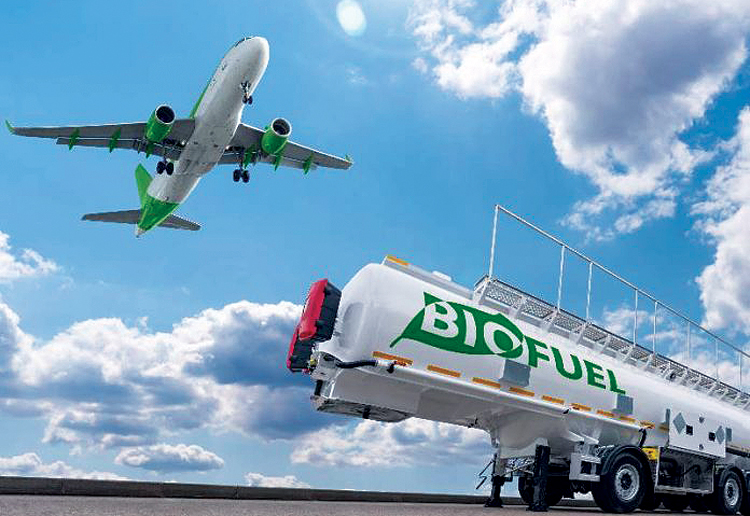 Globally, the civil aviation industry generates approximately 1 billion tonnes of Greenhouse Gases (GHG) emissions, which are rising steadily at the rate of 2.5 per cent per year. This accounts for around two to three per cent of total emissions or around 10 to 12 per cent of transportation emissions globally.

The new sustainable propulsion methods such as powering the aircraft with green electricity or green Hydrogen are not likely to be viable for long haul flights in near future. Using Sustainable Aviation Fuel (SAF) at scale is the only imminent solution for the energy transition and decarbonisation of aviation sector globally. International Air Transport Association (IATA) has estimated that SAF will contribute reduction of around 65 per cent of emissions required, to achieve Net-Zero by 2050 globally.

The technology landscape for production of SAF is rapidly changing, with emergence of newer technologies and pathways, getting commercialised. There are nine technology pathways approved by ASTM International ( formerly known as American Society for Testing and Materials) for production of SAF from various type of feedstock. Out of these, following three pathways are prominent and show great potential:

The sustainability of feedstock and Carbon Intensity of the technology/pathway determines the overall potential of GHG savings by use of SAF. ICAO has classified feedstock for SAF into various categories such as Primary Product, Co-Product, Waste, Residues and By-Product. The feedstock under the categories of Waste, Residues and By-Products are considered to be more sustainable than the feedstock in the category of Primary Product or Co-Product. 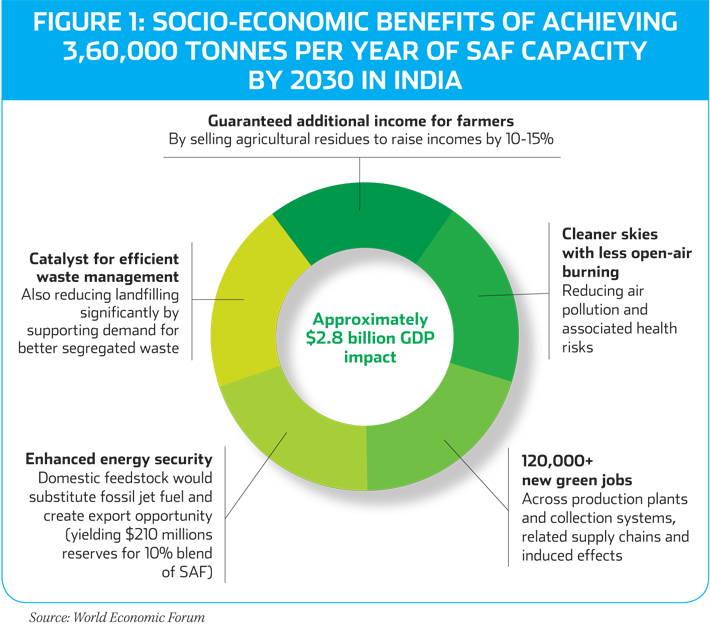 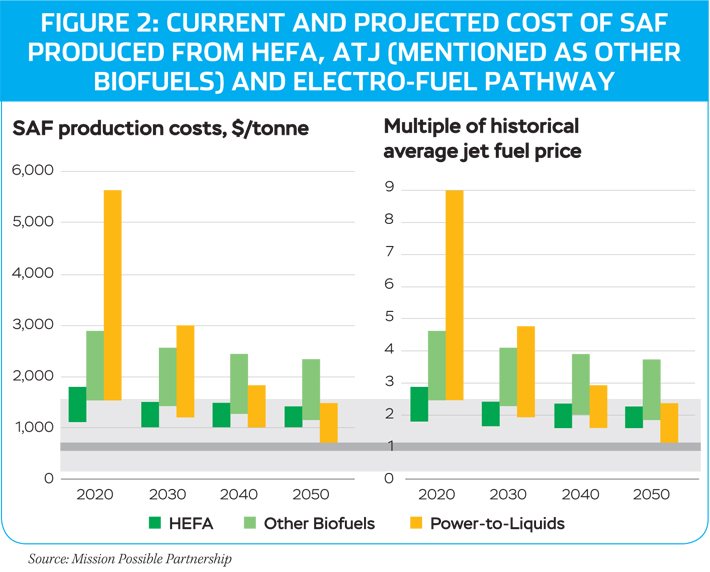 The availability of low cost sustainable feedstock is of prime importance for successful commercialisation of SAF. In India, SAF produced via the ATJ pathway holds great potential due to the surplus availability of feedstock, such as agricultural residues, sugars and starches. An estimated 500 million tonnes of agricultural residues are generated annually in India, out of which a significant amount of it is burnt on the field every year. This not only causes severe air pollution and health hazards, but also adversely impacts agricultural yields.

Even converting just 10 per cent of total agricultural residuesavailable in India, would yield around four to five million tonnes of SAF per year, and thereby saving around 10 to 15 million tons of GHG emissions per year. Further carbon emission savings could also be derived from high-value low carbon renewable fuels produced as co-products during the refining process. Considering that the demand of Aviation Turbine Fuel (ATF) in India is expected to be around 9 million metric tonnes per year by 2025, just 10 per cent of total agricultural residues available in India has potential to replace 50 per cent of ATF, thereby halving the emissions of India’s civil aviation sector.

Currently, the cost of producing SAF from various approved pathways ranges between 2 to 8 times the cost of fossil based ATF

SAF produced from agricultural residues will not only contribute to environmental solutions, but also will help to improve the rural economy. Collecting agriculture residues as feedstock for conversion into biofuels could create employment in rural areas and provide an alternative sustainable revenue stream for farmers (refer Figure 1). Additionally, surplus sugary feedstock such as Cane Molasses or Cane Syrup could also contribute to SAF volumes.

Currently, the cost of producing SAF from various approved pathways ranges between 2X to 8X times the cost of fossil based ATF (refer Figure 2). In order to bridge this gap and commercialise SAF, both incentives and regulations, approach has been adopted in US and EU. The US government has announced ‘SAF Grand Challenge Roadmap’ in September 2022 with the objective to produce 3 billion gallons of SAF by 2030. SAF producer in US gets various economic incentives through Carbon market (Renewable Fuel Standard, Low Carbon Fuel Standard) and Blender’s Tax Credit (up to $1.75 per gallon of tax credits based on Carbon Intensity of SAF). The EU has also proposed a mandate to blend two per cent of SAF by 2025, with a gradual increase to 63 per cent by 2050. 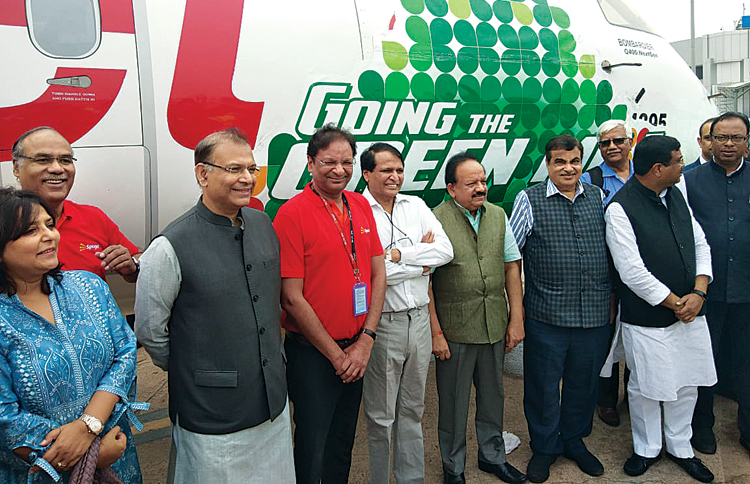 The Indian government has already established various policies to promote transition towards clean energy to achieve the country’s climate goals. These include the National Policy on Biofuels 2018, Ethanol Blending Mandate, the Sustainable Alternative Towards Affordable Transportation (SATAT) and national solar and hydrogen missions. Considering that the cost of SAF is significantly higher than that of the ATF, policies are required to play crucial role in SAF commercialisation in India. While there is the policy of CORSIA (Carbon Offsetting and Reduction Scheme in International Aviation) catering for use of SAF for international aviation, the commercial use of SAF in India will also require policy interventions by the government, with regulations and incentives throughout the value chain. These policy interventions can be in the form of Blending Mandate, Viability Gap Funding, Tax Credit and establishment of local Carbon Markets.

SAF: READYING TO TAKE-OFF IN INDIA

With availability of surplus feedstock and access to rapidly maturing indigenous technologies, India has the golden opportunity to become the international hub for SAF production. India’s SAF industry will be ready to take off with the impetus of appropriate policies.