Time to Seize the Green Initiative

Despite the resolute efforts of the world’s top engine makers to increase fuel efficiency, the growth in commercial flights may dwarf the gains. Till alternative power sources become viable, the accent must continue to be on improving jet engines and reducing fossil fuel emissions.

The World Economic Forum’s Global Risks Perception Survey, 2022, ranks “climate action failure” as the biggest long-term threat facing humanity. The Intergovernmental Panel on Climate Change says that greenhouse gas emissions need to peak by 2025 “at the latest” if humanity is to have any hope of restricting the global temperature rise to 1.5°C above pre-industrial levels. Since the danger is clear, and time is slipping away, one might think the world’s leaders would roll up their sleeves and get going. One would be wrong. According to Climate Action Tracker a huge gap exists between action and commitment. The world is probably heading for a temperature rise of 2.3°C or more by 2100, with potentially catastrophic consequences.

The global airline industry produced around 915 million tonnes of carbon dioxide (CO2) in 2019 (the most recent year for which figures are available) while transporting 4.5 billion passengers. COVID-19 dampened the party but passenger numbers are now rebounding and should regain their former glory by 2024. According to the International Council on Clean Transportation, carbon emissions due to air travel can be reduced by more than three-quarters through expanded use of Sustainable Aviation Fuels (SAF), advances in efficiency technologies, and demand management.

HOW EMISSIVE IS AVIATION?

Today’s jet airliners are comparatively frugal in their fuel consumption. For instance, the Airbus A350 is around 85 per cent more fuel-efficient than the jets of the 1960s. Most engine efficiency improvements have been achieved by introducing new technologies that enabled a larger fan size and a higher bypass ratio. Hence, aviation’s contribution to global warming is still small, responsible for just 2.5 per cent of all human-induced carbon emissions. 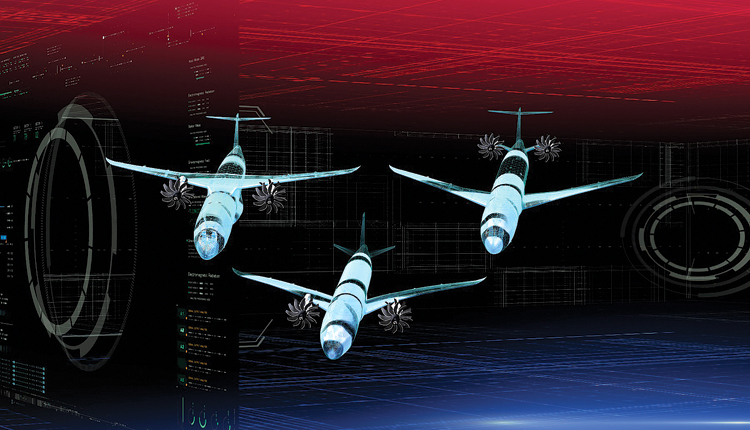 CFM RISE has an open fan architecture that means a much higher bypass ratio and, as a result, delivers greater propulsive efficiency

However, since these emissions are mostly at high altitude, they have complex interactions with the atmosphere that can reinforce the warming effect. When other exhaust products, as well as the effect of contrails are considered, aviation’s contribution to climate change may increase to as much as five per cent. And this is rising: first, because of traffic growth, and second, because other sectors of the economy are far simpler to decarbonise. In fact, aviation’s share of emissions is expected to triple by 2050. Therefore, the International Air Transport Association (IATA) has committed to an extremely ambitious goal. It aims to achieve net-zero CO2 emissions by 2050. While 65 per cent of the contribution to net-zero will come from SAF, 13 per cent is expected from new technologies, and the balance from offsets, carbon capture and other measures.

Jet engines are currently certified to operate with up to 50 per cent SAF and this will increase to 100 per cent eventually. However, SAF production is still less than one per cent of global jet fuel demand and SAF is far more expensive than conventional fuel. In fact, SAF may account for only five per cent of CO2 reduction by 2030 and radical aircraft and propulsion systems need to do the heavy lifting till then. But this cannot happen overnight. Consequently, some experts believe IATA’s net-zero goal is practically unattainable. They may be right, if we restrict the debate to engines, fuels and practices of today. However, the 120 years of aviation have frequently sprung remarkable innovations.

During the COVID-19 pandemic, many carriers seized the initiative and cleaned up their act, replacing their older fuel-guzzling aircraft with newer and more efficient ones. Even fairly new Airbus A380 and the Boeing 747 four-engine airliners are being junked because they are less efficient than twinjets like the Boeing 787 Dreamliner and the Airbus A350.

Peering out through an airliner’s window one may not be able to determine who manufactured the engine. However, almost certainly it was built by one of the ‘big three’ – General Electric, Pratt & Whitney or Rolls-Royce – either alone or in partnership with other manufacturers. GE has a massive lead in market share, totalling around 55 per cent. But only 16 per cent of this is due to its own engines and 39 per cent is thanks to CFM International, its highly successful joint venture with Safran of France. While Pratt & Whitney enjoys 26 per cent market share, Rolls-Royce has around 18 per cent.

RISE TO THE CHALLENGE

The CFM International RISE (Revolutionary Innovation for Sustainable Engines) Technology Demonstration Program was launched on June 14, 2021. RISE’s goals include reducing fuel consumption and CO2 emissions by over 20 per cent compared to today’s most efficient engines such as the CFM LEAP. RISE features a single variable pitch, carbon fibre, open fan, behind which is a row of static guide vanes. The fan diameter is not high, permitting installation even on singleaisle aircraft. According to GE Aviation, “The outlet guide vanes help direct airflow so the open fan can fly at speeds consistent with conventional turbofan engine architectures while improving energy efficiency at noise levels below current generation turbofans.” RISE aims to be compatible with alternative energy sources like SAF and hydrogen to provide greater sustainability benefits. 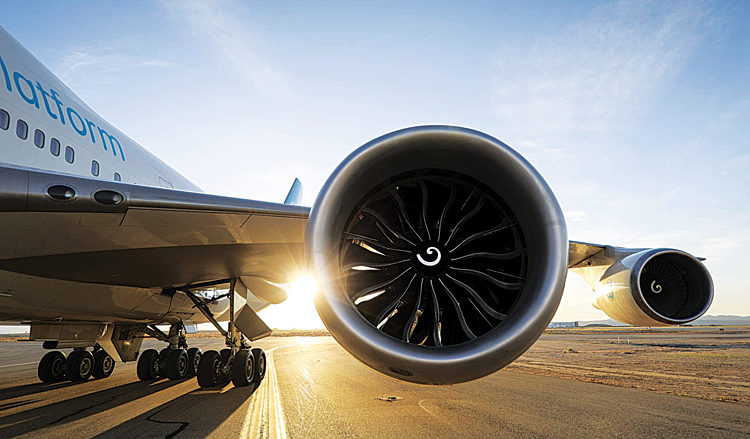 The open fan architecture means a much higher bypass ratio and, as a result, delivers greater propulsive efficiency. Such designs have never been successful earlier. What’s different now is that GE has developed advanced technologies that enable its engineers to anticipate an astounding improvement in fuel efficiency, with relatively small open-fan dimensions and at very low noise levels. Significantly, the projected 20 per cent improvement will be with burning conventional Jet-A; even greater gains can be realised with SAF. And since this is a new technology, RISE is probably only the first of a large family of aero-engines designed to meet differing aircraft needs.

As a CFM partner, GE is pursuing 30,000 pound class engines. But on its own it specialises in much larger engines for some of the biggest commercial aircraft ever. For many years, the Guinness Book of Records listed the GE90-115B as having produced the highest ever thrust of 127,900 lbf (569 kN). This record was broken in November 2017, when the GE90’s successor, the GE9X, delivered an even higher thrust of 134,300 lbf (597 kN). GE also claims the GE9X is its quietest engine ever. It will reduce specific fuel consumption by 10 per cent compared to the GE90-115B. What’s more it promises to deliver massive fuelefficiency gains by providing quad-like capability to twinjets. A Boeing 777X powered by two GE9X engines will typically carry 426 passengers over a range of 7,285 nm. In contrast, the fourengine Boeing 747-8 seats around 467 passengers with a range of 7,730 nm.

As far as commercial engines go, Pratt & Whitney is becoming synonymous with its Geared Turbofan (GTF) engine. The GTF is the only geared propulsion system in aviation service. It has delivered industryleading sustainability benefits of up to 20 per cent reduction in CO2 emissions, 50 per cent decrease in NOx emissions and 75 per cent decline in noise footprint. It has also achieved an impressive engine dispatch reliability rate of 99.98 per cent. With over 1,300 aircraft and more than 15 million engine flight hours of service experience, Pratt says the GTF is delivering world-class operating costs. The company proudly claims it is “the quietest, greenest and most efficient family of engines for single-aisle aircraft.”

The forthcoming Airbus A321XLR, powered by two Pratt & Whitney PW1100G-JM geared turbofans is projected to have the longest range in history for single-aisle aircraft

Although the GTF engines deliver the lowest fuel consumption and CO2 emissions of the Airbus A320 power-plant options, Pratt is not resting on its laurels. It recently started flight testing of its GTF Advantage engine on an Airbus A320neo. The GTF Advantage (certification expected in the second half of 2023) reduces CO2 emissions by an additional one per cent compared to the current GTF model. At sea level, take-off thrust is boosted by a further four per cent while, at higher altitudes, it is increased by up to eight per cent. Consequently, the aircraft’s range and payload will increase significantly, making it ideal for long-haul aircraft. For instance, the forthcoming Airbus A321XLR, powered by two PW1100G-JM geared turbofans is projected to have the longest range in history for single-aisle aircraft: up to 4,700 nm (8,700 km). It aims to secure certification in 2023. 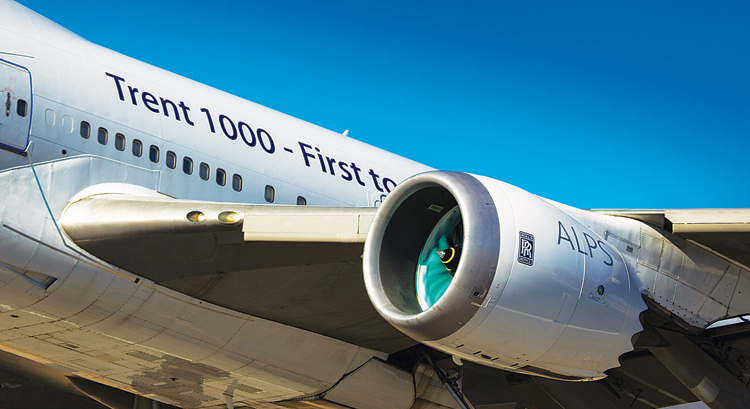 The GTF engine’s technology roadmap includes more advanced materials and the use of hybrid-electric systems. Unlike other engine designs that are probably reaching the limits of their enhancement, today’s GTF engines are the first generation of this new architecture. Hence as the company confidently claims, “The family has a very long runway for growth.”

The Rolls-Royce UltraFan with a fan diameter of 140 inches (3.5 m) will be the world’s largest jet engine when complete. Built with 100 per cent SAF use and the future aviation picture in mind, Rolls-Royce expects it to be 25 per cent more fuel-efficient compared to the first generation of its Trent engines. There will also be a 40 per cent improvement in NOx output, 35 per cent less noise and 50 per cent less non-volatile matter. UltraFan technology will be scalable to create engines with a thrust range of 25,000lb to more than 100,000lb, for single-aisle or twin-aisle aircraft that may be developed from the 2030s onwards. Rolls-Royce is actively exploring potential options for hybrid-electric and hydrogen power solutions.

Despite the resolute efforts of the world’s top engine makers to increase fuel efficiency, the growth in commercial flights may dwarf the gains. Till alternative power sources like electricity or hydrogen become technologically and commercially viable the accent must continue to be on improving jet engines and reducing fossil fuel emissions.

Small electric or hybrid-electric passenger aircraft may be available within three or four years. Hybrid-electric regional airliners will probably follow. Hybrid-electric propulsion could enhance the performance during different phases of flight, and allow an impressive 30 per cent reduction in fuel burn and CO2 emissions. And Airbus has ambitious plans to surmount the huge technological problems involving hydrogen and develop the world’s first hydrogen-powered commercial aircraft by 2035. Such an aircraft would produce zero CO2 emissions in flight. It remains to be seen on what scale and for which size of aircraft these alternative power sources can be viable.

Due to a slew of green initiatives, the commercial aviation industry is at least succeeding in restricting the growth of emissions to approximately half the percentage increase of passengers. Hearteningly, KLM has even launched a “Fly Responsibly” campaign that urges its customers to consider environmentally friendly alternatives to flying – like train travel or virtual conferencing – whenever possible. It may be a small gesture but it shows that at least some carriers are gracefully pursuing a more environmentally sustainable path. Every drop of effort adds up to the big picture. The aviation industry well knows that time is short and that if it fails to go green its very survival could be at stake.