Fuel efficiency refers to distance an airplane can travel on one gallon of fuel and how low its carbon emissions are. The available seats on aircraft are expected to grow by around five per cent yearly. The global fleet is expected to grow by 20,930 aircraft to reach about 40,000 by 2032. It is estimated that fuel demand from aviation will increase around 2.3 per cent annually till 2025. Aircraft manufacturers and airlines are working closely to reduce emissions and fuel consumption through increasing fuel efficiency using new technologies, designs, materials, improving engines, enhancing aerodynamics and using lighter materials. Pratt & Whitney is part of the ‘double-bubble’ D8 design experiment that involves moving the engines from under the wings to the top of the plane near the tail. This would dramatically reduce drag, noise and improve fuel efficiency.

Air-breathing jet engines are essentially combustion engines and include turbojets, turbofans, ramjets and pulse jets. Most modern subsonic jet aircraft use complex high-bypass turbofan engines. They give higher speed and greater fuel efficiency. High-speed applications (ramjets and scramjets) use the ram effect of the vehicle’s speed instead of a mechanical compressor. Turbofans have an additional fan at the front of the engine which accelerates air in a duct bypassing the core gas turbine engine making these more efficient. Turbofans are the dominant engine type for medium and long-range airliners. At high speeds, the large frontal area of turbofans generates more drag and therefore, they are not used for supersonic flight. The thrust of a typical jetliner engine went from 5,000 pounds in the 1950s to 1,29,000 pounds nowadays. As per the Federal Aviation Administration (FAA), on an average, turbine engines have a failure rate of one per 3,75,000 flight hours, compared to one every 3,200 flight hours for piston engines. The General Electric GE90 has an inflight shutdown rate of one per million engine flight hours. The Pratt & Whitney Canada PT6 is known for its reliability with an in-flight shutdown rate of one per 6,51,126 hours.

The lighter the engine, the better the thrust-to-weight ratio and lesser fuel is used to compensate for drag due to the lift needed to carry the engine weight 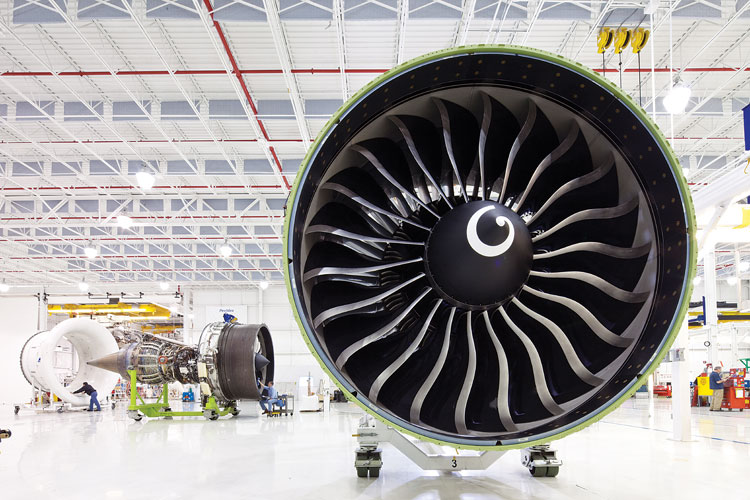 A jet engine burns fuel and generates thrust and measure of its efficiency is judged by how much fuel it uses to generate the thrust. If air/combustion gases flow more smoothly, the engine will be more efficient and will use less fuel. This is called specific fuel consumption. The thrust-to-weight ratio of jet engines is an important parameter. The lighter the engine, the better the thrust-to-weight ratio and lesser fuel is used to compensate for drag due to the lift needed to carry the engine weight or to accelerate the mass of the engine. Turbofans have a mixed exhaust consisting of the bypass air and the hot combustion product gas from the core engine. The amount of air that bypasses the core engine compared to the amount flowing into the engine determines a turbofan’s bypass ratio. While a turbojet engine uses all of the engine’s output to produce thrust in the form of a hot high-velocity exhaust gas, a turbofan’s cool low-velocity bypass air yields between 30 and 70 per cent of the total thrust produced by a turbofan. The advent of the turbofan replaced the very distinctive jet noise with another sound is known as “buzz saw” noise. Low-bypass engines are preferred for military application due to the high thrust-to-weight ratio while high-bypass ratio engines are preferred for civil use for better fuel efficiency and low noise. High-bypass turbofans are usually most efficient when the aircraft is travelling at 800 to 885 kmph, the cruise speed of most large airliners.

Major players that manufacture turbofan engines are Pratt & Whitney, General Electric, Rolls-Royce, and CFM International, a joint venture of Safran and GE. Aero-engine Corporation of China is a new stateowned entrant with 96,000 employees. GE Aviation has also set up a cooperative venture with Pratt & Whitney, named Engine Alliance under which the companies have developed an engine for the Airbus A380 named GP7000, based on a 0.72 flow scale of the GE90-110B/115B core. Pratt & Whitney is a subsidiary of United Technologies. The company reportedly has 38,737 employees supporting over 11,000 customers in 180 countries and had a revenue of $20.9 billion in 2020. Their large commercial engines power over 25 per cent of the world’s passenger aircraft. Rolls-Royce engines powers Airbus A380, Airbus A350, Boeing 787 Dreamliner and many regional and corporate jets. CFM International was formed to build and support the CFM56 series of turbofan engines derived from the two-parent companies’ commercial engines GE’s CF6 and Snecma’s M56. The joint venture has delivered 30,700 engines to more than 570 operators and has large orders. GE is the highest-ranked engine company with the 33rd slot in Fortune Global 500 companies’ 2020 list by gross revenue. 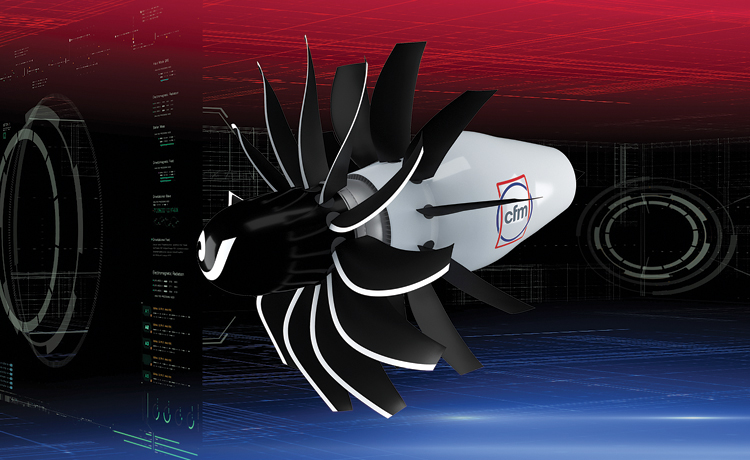 The GE9X is a high-bypass turbofan developed by GE Aviation exclusively for the Boeing 777X that powered the 777-9’s maiden flight in 2020. It received its FAA type certificate on September 25, 2020. Derived from the GE90 with a larger fan, the engine has 3D-printed fuel nozzles and the most extensive use of parts made from lightweight and ultra-heat-resistant materials called the Ceramic Matrix Composites (CMCs), allowing complex internal shapes and higher bypass and compression ratios. CMCs operate in temperatures up to 2,400 degrees Fahrenheit. The engine also uses 16 fourth-generation carbon-fibre fan blades that feed air into an 11-stage high-pressure compressor with high engine efficiency. GE Aviation, which is the exclusive engine maker for the 777X, has received orders for over 700 GE9X engines valued at $29 billion from airlines including Emirates, Lufthansa, Etihad Airways, Qatar Airways and Cathay Pacific. A blend of evolutionary and revolutionary designs makes the GE9X the most fuel-efficient jet engine GE has ever produced on a per-pounds-of-thrust basis. It is designed to deliver a ten per cent improved aircraft fuel burn versus the GE90-115B-powered 777-300ER and a five per cent improved specific fuel consumption versus any twin-aisle engine available.

GE Aviation, which is the exclusive engine maker for the 777X, has received orders from airlines for over 700 GE9X engines valued at $29 billion 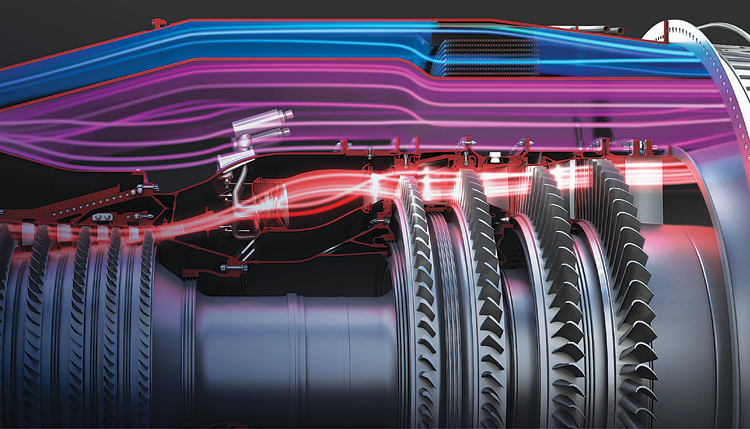 The Adaptive Versatile Engine Technology programme is an aircraft engine development programme with the goal of developing an efficient adaptive cycle or variable cycle, engine for next-generation aircraft

The ACE, unlike traditional engines with fixed airflow, is a variable cycle engine that will automatically alternate between a high-thrust mode for maximum power and a high-efficiency mode for optimum fuel savings. ACE is designed to increase aircraft thrust by up to 20 per cent, improve fuel consumption by 25 per cent, and extend the range by over 30 per cent. The Adaptive Versatile Engine Technology programme is an aircraft engine development programme with the goal of developing an efficient adaptive cycle or variable cycle, engine for next-generation aircraft. Rolls-Royce, GE Aviation, and Pratt & Whitney are major participants in the programme.

GE Aviation and Safran’s CFM RISE (Revolutionary Innovation for Sustainable Engines) bring in bold technology targeting over 20 per cent lower fuel consumption and CO2 emissions compared to today’s engines. The programme will demonstrate and mature a range of new, disruptive technologies for future engines that could enter service by the mid-2030s. It will reinvent the future of flight that will take the next generation of single-aisle aircraft to a new level of fuel efficiency and reduced emissions. The two have extended their partnership to the year 2050 with intent to lead the way for more sustainable aviation and to half CO2 emissions by 2050. Their LEAP engine launched in 2008 already reduces emissions by 15 per cent compared to previous generation engines. The technologies from the RISE Programme will serve as the foundation for the next-generation CFM engine that could be available by the mid-2030s. It will bring 100 per cent compatibility with alternative energy sources such as Sustainable Aviation Fuels and hydrogen. The state-of-the-art propulsive efficiency for the engine, including developing an open fan architecture. The programme will also use the hybrid electric capability to optimise engine efficiency while enabling the electrification of several aircraft systems. More than 35,000 CFM engines have been delivered to over 600 operators around the globe, accumulating one billion plus flight hours.

There are challenges and opportunities for more-electric aircraft of the Boeing 787 or Airbus A350 class. Hydraulic and pneumatic systems such as those for actuation or air conditioning are already being replaced by electrical systems to save weight and improve reliability. Each 787 can produce around 1,000kVA for on-board systems, markedly more than previous-generation models. On-board power storage has also grown significantly. Boeing will initially develop an electrically powered ten-seater aircraft and an electrically powered 180-seat short-haul aircraft is expected by 2027.

Engine fuel efficiency has a direct impact on fuel consumption and the cost of airline operations. As per the International Air Transport Association fuel fact sheet, the global airline industry’s fuel bill was estimated to be $100 billion in 2021 accounting for around 19.0 per cent of operating expenses. In 2022, the fuel bill is forecast to be $132 billion, accounting for 19.5 per cent of operating expenses at around $67.0 per barrel Brent. Major engine manufacturers are adopting measures to improve fuel efficiency. 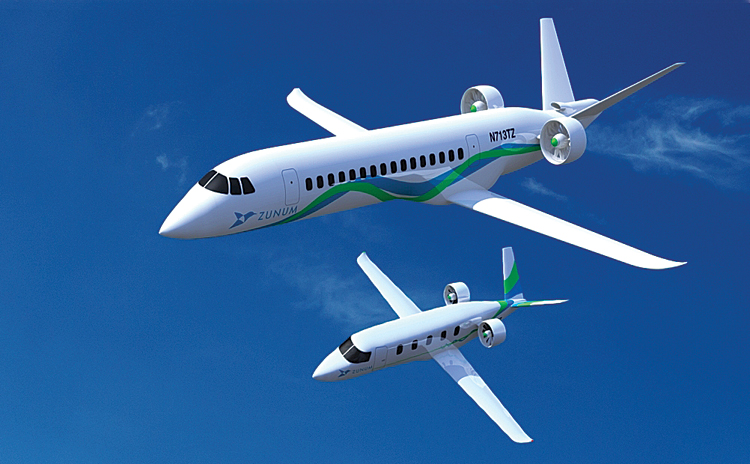 Zunum Aero, backed by Boeing and JetBlue Technology Ventures, is developing hybrid-electric aircraft for fast and affordable travel up to 1,000 miles

Technology is already delivering an impressive one per cent per annum saving on fuel burn. Pratt & Whitney says its new engines will use an internal gearbox to slow down the speed of the fan and could save 20 per cent on fuel consumption. CFM International has leaped from the LEAP to RISE engine programme. Efforts to introduce biofuels to power jet engines are on. Airbus/Rolls-Royce hybrid electric with a gas-turbine engine will allow peak power for takeoff and climb while for descent, the engine is shut down and the electric fans recover. NASA is working on advanced technologies to reduce carbon dioxide emissions from jet engines by more than half. Research on plasma jet engines, that will use electricity to generate electromagnetic fields instead of fuel by compressing and exciting argon gas into a plasma similar to that inside a fusion reactor, is on.

NASA indicates that with advanced aerodynamics, structures and geared turbofans, fuel savings of up to 50 per cent by 2025, is possible and up to 60 per cent by 2030, with new ultra-efficient configurations and propulsion. By 2030, hybrid-electric architectures may be ready for 100-seater airliners. Engines embedded in the tail to ingest the low-energy fuselage boundary layer flow and re-energise the wake to reduce drag, are being considered by several designers. The growth of computer technology and the microelectronics revolution allows full-authority electronic digital control of aircraft engines. The smart engine has a huge magnitude of computational power that supports improved engine efficiency and reduces fuel consumption. A lot is unfolding.