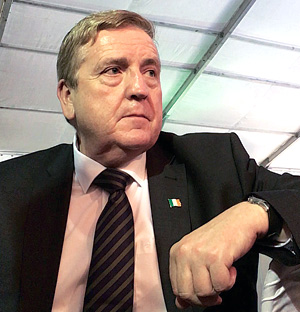 Pat Breen, the Minister of State for Employment and Small Business, Ireland

Ireland has been a pioneer of sorts in aviation and its aircraft leasing industry has set benchmarks in the world. With expertise in aviation leasing, training, education and other aviation related activities, Ireland is offering business opportunities to India. Disclosing this to SP’s AirBuz in an exclusive interview with Editor-in-Chief Jayant Baranwal, the Ireland Minister of State for Employment and Small Business, Pat Breen, states that the two countries have so much to share. Patrick Edmond, Group Strategy Director, Shannon Group Plc and Managing Director, International Aviation Services Centre also participated in this discussion.

Jayant Baranwal (JB): Could you tell us how Ireland has reached the peak in aviation and in how much time?

Pat Breen (Breen): Ireland being an island nation, there are only two ways to get out, either by air or by sea. Our geographic location is such, the most westerly country in Europe, airlines en route to Europe have to stop by. Airlines in the early days stopped off in Ireland en route to Europe. Of course, the early pioneers also stopped in Ireland, as in the first Trans Atlantic flight crossed to Europe. Our history of being pioneer in aviation is something special to us. Our airports started gathering momentum in Dublin, Shannon, Cork airports. So I suppose this has come from a number of entrepreneurs and pioneers in aviation and I go back to somebody like Dr Tony Ryan who started off Guinness Peat Aviation (GPA). And then there is the growth of Aer Lingus, our national carrier. So we had a lot of expertise and entrepreneurs working with GPA. At one time in the 1980s, GPA was the largest leasing company of aircraft in the world.

“FIRST OF ALL, GOVERNMENT SUPPORT TO ENTREPRENEURSHIP IS EXTREMELY IMPORTANT. IN THE AREA OF SCIENCE AND TECHNOLOGY WE HAVE INVESTED TO TRAIN APPRENTICESHIP, GRADUATES AND WE HAVE ENCOURAGED OUR UNIVERSITIES TO LINK UP WITH AVIATION COURSES. THIS IS HOW WE ARE GOING TO MOVE FORWARD.”

Back in the 1970s, flying and aviation was quite expensive and Dr Ryan had the vision to start this company and he was joined by a number of very dynamic and young people who wanted to excel themselves in the aviation sector, people like Michael O’Leary who founded Ryan air. Out of Guinness Peat Aviation came Ryan Air which was called after Dr Tony Ryan. Of course, Ryan Air started as a very low-cost airline, based on the South-Eastern model in the US. Low-cost was very new at that time, a lot of the traditional airlines had their cartel charging whatever they liked. In those years, to cross to the UK it used to cost 400 pounds, today you can get it for as little as 20 pounds each way that is what has happened with competition.

That is how low-cost carriers have made a big difference to us and that model was copied by carriers in Europe. So where are we now? The Irish aviation business is at a very strong point, strong not just in leasing. We lease over half the aircraft in the world from companies like GE Capital Aviation Services (GECAS), Aercap and various other smaller leasing companies and of course Avolon which had Domhnal Slattery, a very good friend of mine from my own county who was the CEO. The tradition was there, the entrepreneurship was there. Our other area of expertise has been in the maintenance of aircraft and painting of liveries. We have Shannon MRO, Shannon Aerospace and they are doing extremely well. We have got very good skilled workers. We get aircraft from all over the world, for maintenance and painting livery. Qatar Airways, American Airlines among others get work done here.

At the moment the aviation sector is going through a transition. We have Patrick from Shannon Airport Authority on this delegation. We have made that airport independent. It operates on its own. Shannon airport had the first duty free shop in the world; the first Irish coffee was made at the airport; and the first custom free zone in the world is here. From this point of view it makes us experts in aviation. Aer Lingus is now part of the International Airlines Group. We are a small country it is difficult for a national carrier to survive, so Aer Lingus merged. In the 1990s and 2000, there were mergers and consolidation of Lufthansa, AFI, KLM, Aer Lingus, etc, with different groups.

As we come out of our downturn in the economy and start growing again, we find that we are one of the fastest growing economies in Europe and aviation is an important sector to grow. We are strong in aircraft maintenance, leasing, aircraft parts, software for aircraft. We have developed a cluster for aviation in the Midwest region of Ireland where Shannon Airport is and companies are in the process of starting off new aviation related industries there. We are here in India to showcase this and to bond a friendship and relationship between Ireland and India which is practically a huge country, needing connectivity.

JB: In what ways can you help India?

Breen: There are a number of ways. We are leasing a lot of airline companies. We lease aircraft from Irish companies.

JB: What kind of support has there been from the government to your airlines, to your entrepreneurs as that could be good benchmark for India?

Breen: First of all, government support to entrepreneurship is extremely important. In the area of science and technology we have invested to train apprenticeship, graduates and we have encouraged our universities to link up with aviation courses. This is how we are going to move forward. We want Ireland to be a centre of excellence for aviation and the government is spending money on science and technology, in university courses, and also encouraging airports, providing tax incentives, etc.

“WE OFFER TAX INCENTIVES FOR AIRCRAFT TO SET UP AIRLINE LEASING COMPANIES, TO SET UP MAINTENANCE AND OTHER AIRCRAFT RELATED COMPANIES. WE SEE THAT IS IMPORTANT TO GROW, CLUSTER GROWTH FROM BOTH THE US SIDE AND THE ASIAN SIDE.”

JB: What kind of tax incentives?

Breen: Tax incentives for aircraft to set up airline leasing companies, to set up maintenance and other aircraft related companies. We see that is important to grow, cluster growth from both the US side and the Asian side and that is why we are looking at India. We have invited the Indian Civil Aviation Minister to visit Ireland and see what we have to offer, not just for the ICT sector but also the aviation sector.

JB: You said today it costs 20 euros, does it allow profitability at such low fares?

Patrick from Shannon Airport (Patrick): It does, because airlines like Ryan Air and other carriers are extremely competitive, extremely price focused. We see that happening in the Indian market as well. What it means is that they look very closely at all parts of their costs, airport costs very aggressively, staff costs very aggressively, and they take each of these slices of the pie and squeeze each of them and that has this result.

Breen: The airlines will make up this with expensive seats as well with last minute bookings.

Patrick: If I have to travel tomorrow I will not get the 20 euro fare. Also I will get coffee for 20 euro and my suitcase will be charged.

Breen: Also the fare during certain times of the day are different, early morning flights for business people going out are not cheaper, so also late night flights into London. They have revolutionised the whole costs and brought down costs. There is fierce competition on the Irish routes to London. It is not just with the two airlines from Ireland. We have British Airways flying in and also a number of smaller airlines flying into the regional area as well as UK.

Patrick: This has big impact on airports and the many incumbent airports are being challenged. Many of the airlines have started flying into these smaller secondary airports which maybe 50 miles (80 km) away and the consumers have been educated.

Breen: That has put challenges on Shannon Airport to bring down their airport costs too.

JB: The airports are much friendly in terms of costs...

Patrick: They have got to be, they are not monopoly suppliers of airports.

Breen: They have to depend on other sources of revenue, besides airlines, leasing of shops, charging for car park, etc, it is a combination of issues.

Patrick: You were asking how Ireland can help India. Some of the ways we can help is bring leasing business, can help aircraft availability through leasing to the Indian market. Some of the other areas we are strong in is aviation education, technical training, training engineers, pilot training and so on.

Breen: We get crew training from all over the world. We are a centre of excellence in that area. There is very successful company in Dublin which makes seats for aircraft, also software for aircraft. We want to help out in countries as well and to grow and it is an area we are developing and formulating a policy.

Patrick: One of the reasons for our industry to be successful is due to the enlightened government policy and to a very pragmatic aviation regulator. Our aviation regulator has been very supportive of the industry. Safety is absolute top priority and they are commercially aware and they help the industry. For example, India is planning to build a civil aircraft under ‘Make in India’ and Ireland could help in many ways and the Irish regulator can help in certifying the aircraft. Breen: Our skills are very important that is why we are so successful in aircraft maintenance. Even though we are not a low-cost economy, we have a lot of airlines coming to us because of the good job we do.

JB: How is the business aviation doing in Ireland?

Breen: Business aviation is small. We have a number of operators but they are small.

JB: Does it contribute to your regional connectivity?

Breen: It does. For regional connectivity, we are subsidising. The government gives the industry subsidies to fly in to western region, north-east, south-east. We fly smaller turboprop aircraft into those regions.

JB: What kind of aircraft?

Breen: We have to maintain regional balance and ensure that these regions are not disadvantaged. So we have the PSO subsidy and it is quite expensive for the government, but it is good for regional development.