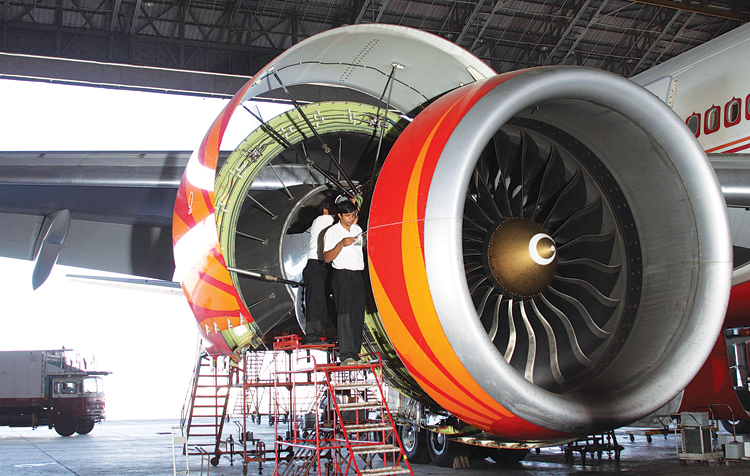 One of the biggest growth restraints for the market has been high taxes and custom duties levied on the MRO sector which has made them comparatively costlier in India than abroad.

The Indian aerospace industry is one of the fastest growing aerospace markets in the world. With a long history spanning six decades, the country has an excellent pool of resources matching global standards. India’s liberalised economy offers sound opportunities for international companies that look to outsource manufacturing as well as maintenance, repair and overhaul (MRO) activities. While forecasters predict that engines will remain the largest and fastest-growing sector of the commercial jet MRO business over the next decade, the market is becoming increasingly competitive and its dynamics more complicated. Aero-engine OEMs have targeted the aftermarket for well over a decade and have captured a large portion of the MRO business. This trend is set to continue and will make life harder for other MRO providers. Analysts forecast the global aircraft engine MRO market to grow at a CAGR of 5.64 per cent during the period 2018-2022. 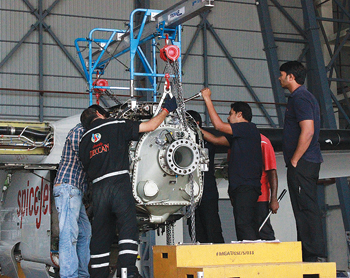 Global: Air travel in emerging countries is growing thus increasing the demand for aircraft engine MRO service providers. Many new MRO service centres have been setup in such countries in recent years. This increases the participation of regional companies (Tier-II or Tier-III suppliers) in the field of aircraft engine MRO. Development of next-generation engines is the major factor driving the growth of the market. The leading edge aviation propulsion (LEAP) engine, is the most fuel-efficient engine available in the market which has propelled the market for aircraft engines. Additionally, the need for proper maintenance of engines and components, is also driving the growth of the aircraft engines MRO market. With the global aircraft fleet projected to reach almost 38,000 by 2028, the global aircraft MRO is estimated to reach a 10-year consolidated market size value of around $115 billion.

India: The current Indian Commercial Fleet has increased from 420 in 2010 to 589 airplanes in 2018 and is expected to reach 1,000 by 2020. One of the biggest growth restraints for the market has been high taxes and custom duties levied on the MRO sector which has made them comparatively costlier in India than abroad. Due to lack of proper MRO facilities and high taxes being imposed on MRO services in India, 90 per cent of the Indian MRO work is outsourced to countries like Singapore, Dubai, UAE, Sri Lanka and others. There are eight major players in the market in India, AIESL, Air Works, Indamer Private Limited, Deccan Charter, Taj Air, Bird ExecuJet, GMR Aero Technic Limited and Max MRO Private Limited. Presently, the market is concentrated with these players capturing more than half of market revenue in financial year 2017-18. AIESL, a subsidiary of Air India, is the only player extending fullfledged engine overhaul facility in India and was the market leader in FY’17, followed by Air Works which has the second highest share in the market revenue. Air Works has a global presence, but provides MRO services only in India.

Aero-engine manufacturers have offered the business model using utilisation-based selling, i.e., availability-based contracts. This has allowed OEMs to expand their core business as manufacturers to MRO service providers. OEM MRO now supports all the operational requirements of the aero-engine. This situation results in shifting risks and uncertainties to the service provider from customers. Many approaches have been conducted to minimise risks and uncertainties, such as enhanced sensor technology application regarding health monitoring and prognosis in real time. This data is then utilised to take the advantages from condition-based philosophy of maintenance. Through this philosophy, OEMs have secured their position in the aftermarket MRO service provision.

Traditionally, non-OEM aero-engine MRO service providers were offering repair-only services. This trend, however, forced them to become more competitive in retaining their market, despite their handicaps compared with OEM MRO. They now deploy a similar business model to their competitors, i.e., combining their service offer with products. This business model is called productisation. In addition, non-OEM MRO service providers are obliged to offer lower cost solutions with higher flexibility like shorter maintenance lead time than their competitors.

The OEMs continue to dominate the market particularly for large engines MRO with a variety of maintenance packages that are usually based on fixed price hourly or cyclic usage. Some are timelimited, some life-limited, usually covering the operator’s entire fleet of installed and spare engines. Some include provision for all spare engines, some for ‘top-up’ spares only. The airline benefits from easier budgeting and the OEM from controlling the entire aftermarket and the generated revenue. In addition, the service provider typically offers engine health monitoring, technical support and, depending on the scheme type, certain technical upgrades, but not performance upgrades. Operational mishandling and foreign object damage (FOD) are excluded. Non-OEM leasing companies have historically had difficulties with these schemes as they prevent the lessor’s collection of security in the shape of reserves and because of difficulties in realising value in the engines at lease end. 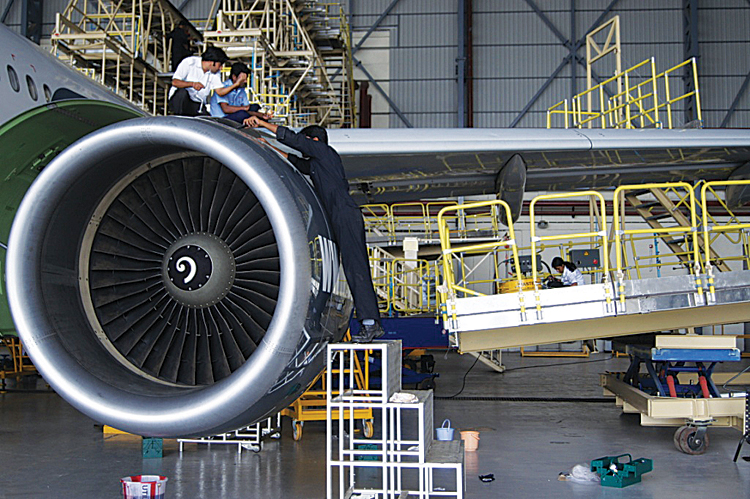 India will require 1,750 new passenger and cargo aircraft over the next 20 years and this will generate a sizable aero-engine market whose MRO is waiting to be exploited in the ‘Make in India’ domain.

The OEMs claim that these schemes preserve residual value of the engine because it has always been operated under the watchful eye of the OEM and has only had installed on it original OEM components, or used ones refurbished under OEM repair schemes. The larger, more powerful independent MRO shops are the only ones who can hope to offer a competing product by virtue of them having a close association with the OEMs and so ultimately, they become part of the same system, operating under the same rules regarding non-OEM parts and inevitably compromising true competitive choice. The OEMs’ objectives, if not always desirable, are understandable. They invest large sums of R&D in developing new engine types with the profitability of these programmes relying upon spare parts sales. These are now being challenged by an increased number of alternatives for the supply of spare parts.The introduction of 3D printing technology is one of the major trends likely to be witnessed in the global aircraft engine MRO market during 2018-2022. Additive manufacturing comprises the use of digital three-dimensional design data to build a component in layers by depositing material. The application of this technique has been growing in aerospace manufacturing because of the advancement in 3D printing.

Hindustan Aeronautics Limited (HAL) is the only real Indian player in the domain of engines, whose engine division has a long history of licensed-production of various imported designs. Considering the fleet replacement programmes, modernisation strategies and aircraft upgrade projects of the Indian Air Force coupled with increasing defence expenditure, the Indian military aircraft engines market is poised to grow year-on-year. Some of the major engine procurement programmes in the near future will be for the Avro, An-32, LCA Tejas, AMCA and these entail procurement of around 3400 to 4000 engines. The Indian Armed Forces are embarked on the largest helicopter procurement programmes and their requirements aim at strengthening the military helicopter assets through the procurement of 1000 plus rotary-wing platforms including attack, utility, multi-role and airlift platforms by the end of 2027. Projections are that the country would need 4000 to 6000 helicopter engines by 2020.

INDIA WILL REQUIRE 1,750 NEW PASSENGER AND CARGO AIRCRAFT OVER THE NEXT 20 YEARS TO MEET AN EXPONENTIAL RISE IN BOTH PASSENGER AND FREIGHT TRAFFIC

The Ministry of Defence estimates that India’s military aero-engine market will amount to 3,50,000 crore over the next two decades which means around 17,500 crore per year. The opportunities available span the entire spectrum from supplying engine components to providing MRO services. In fact, MRO related expenses can often exceed the initial procurement cost of an engine. Engine maintenance constitutes 35 per cent of the overall cost of aircraft maintenance. More than two thirds of engine maintenance cost is incurred on materials, with labour accounting for another 22 per cent.

Aero-engine components are likely to be sourced domestically which include nozzles, turbine blades and vanes, drive shafts, flexible couplings casings, compressor, housings, stators and sub-assays. Thus, there would be plethora of opportunities and ample business for existing Tier-2 (those companies who will build engine hydraulic systems, electrical power systems etc.) and Tier-3 (companies that are into casting and forging capability and can build fasteners, bearings, wiring harness and machine structural sheet metal) players. The tier-3 segment, which is still upcoming, is likely to see new companies emerging.

India will require 1,750 new passenger and cargo aircraft over the next 20 years to meet an exponential rise in both passenger and freight traffic. To help meet this growth, India will need 1,320 new single-aisle aircraft and 430 wide-body aircraft valued at $255 billion. This will generate a sizable aeroengine market whose MRO is waiting to be exploited in the ‘Make in India’ domain. Private players along with the aero-engine OEMs need to develop India-specific business models to provide MRO facilities meeting all the regulatory framework optimally. A huge potential in India is waiting to be tapped.