Honeywell Aerospace: Century and Beyond

Issue: 3 / 2014By R. Chandrakanth Reporting from Phoenix, USAPhoto(s): By Honeywell 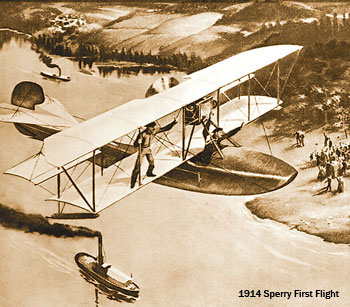 Starting with the first ever autopilot demonstration by Lawrence Sperry on June 18, 1914, Honeywell Aerospace commenced its highly eventful journey, developing technologies that have contributed immensely to aviation

In its first ever effort of presenting to an international media, the journey of Honeywell Aerospace and what the future holds in terms of technological breakthroughs it is making, Honeywell Aerospace which is celebrating 100 years of its journey, recently invited a select gathering of 30 odd International Media from all over the world, to visit its Technology Labs in Phoenix, Arizona, USA. SP Guide Publications (SP’s Aviation and SP’s Airbuz) was the sole representative from not just India, but South Asia. This is testimony to the fact that the Indian media house is a force to reckon with.

The most striking part of the visit for the media was the contagious passion of the scientists at Honeywell Aerospace to develop technologies that are going to significantly transform aviation. Their focus has solely been to enhance what they call ‘Honeywell User Experience’ or HUE. And they have been largely successful as one can list a series of milestones over the past 100 years. Building upon a strong foundation, the Honeywell team is developing solutions that span air traffic modernisation, flight and runway safety, engines, cockpit and cabin electronics, connectivity, logistics and more that deliver safe, efficient, productive and more comfortable transportation experiences for manufacturers, airlines, business and general aviation aircraft, military and airports.

Honeywell Aerospace has a solid base of technology built over the years. Starting with the first ever autopilot demonstration by Lawrence Sperry on June 18, 1914, Honeywell Aerospace and its legacy companies, including Sperry, Bendix, Garrett AiResearch, Pioneer, Lycoming, Grimes, King, AlliedSignal, and EMS Technologies, have been at the forefront of both military and civilian aviation advancement for 100 years. The company proudly presents a lineage with many of the greatest names in aviation history.

Honeywell legacy company Sperry developed the first “airplane stabiliser,” changing flying forever and giving birth to the science of controlled flight. Developed by inventive genius Elmer Sperry, the device was first demonstrated in June 1914 by Sperry’s son Lawrence during Airplane Safety Contest in France. Simple by today’s standards, the gyroscopic airplane stabilizer foreshadowed hundreds of Honeywell innovations that have contributed to the mission-effectiveness of military aircraft and spacecraft and made flying in a commercial airplane the safest and the most efficient form of transportation the world has ever known.

The Roaring 20s were a glamorous age for aviation and Honeywell legacy companies played critical roles in two of the biggest achievements of the decade: Charles Lindbergh’s historic solo flight across the Atlantic in 1927 and Jimmy Doolittle’s first instruments only “blind flight” in 1929. Doolittle flew the first successful all-blind flight from take-off to landing using the Sperry Gyro Horizon and Sperry Directional Gyro. He took off in dense fog under a hooded cockpit, with an un-hooded safety pilot beside him, in a Consolidated NY-2 biplane from Mitchell Field, Long Island, circled the field and landed without once seeing outside the cockpit, proving the practicality of instruments-only flight.

The 1930s were a busy time for Honeywell legacy companies. Bendix started the Bendix Air Transcontinental Air Race in 1931, Sperry introduced the first aircraft artificial horizon and AiResearch developed the first all-aluminium aircraft intercooler. Developed by Sperry, an artificial horizon helps the pilot orientate the aircraft relative to Earth’s horizon, a highly useful facility in cloudy weather or at night. Artificial horizons are still installed in all aircraft, small and large and have evolved to modern electronic versions.

World War II was a catalyst for unprecedented advancements in the aviation industry. Honeywell Aerospace and its legacy companies played a pivotal role in advancements that enhanced the performance of military aircraft during the war and helped to set the stage for the boom in civil aviation that followed. Sperry tested the first autopilot and bombsite that became the standard for US aircraft during World War II. Garrett AiResearch developed innovations that led to the advent of cabin pressurisation, which enabled aircraft to fly at higher altitudes. And Honeywell developed the first electric fuel gauge, which improved accuracy and measured fuel in weight rather than volume.

In the decade following World War II, Honeywell Aerospace and its legacy companies were hitting on all cylinders with major technology and business achievements in commercial and military aviation. The companies were starting to develop technologies that would aid in the exploration and use of the final frontier: space. The X-15, a rocket-powered aircraft operated by the US Air Force and the National Aeronautics and Space Administration (NASA) was developed in the 1950s. Equipped with a Honeywell autopilot and other systems, the X-15 set speed and altitude records, reaching the edge of outer space and returning with valuable data used in aircraft and spacecraft design.

The 1960s rocketed Honeywell Aerospace and its legacy companies into the space race and a wide range of technologies were developed to make human space flight possible. Honeywell teamed up with NASA and prime space contractors on the Mercury, Gemini and Apollo programmes, including the mission that landed men on the moon by the end of the decade. The 1960s also brought significant achievements in commercial air travel. Among them, the first gas turbine Auxiliary Power Unit for a commercial aircraft, the Series 85, which was first installed in the Boeing 727. The first solid-state transceiver for two-way voice communications was introduced by King Radio and digital avionics for commercial airliners entered the market.

Garrett AiResearch entered the propulsion engine business with a flourish in the 1970s by introducing the landmark TFE731, the first successful turbofan engine for business jets. The engine was first to give business jets transcontinental range, was the first to use a geared turbofan and the first successful production propulsion engine of any size to rely on a full-authority analog electronic fuel control. Don Bateman led a team of Garrett AiResearch engineers that developed the first Ground Proximity Warning System (GPWS) in the 1970s and the Enhanced GPWS (EGPWS) in the 1990s. For his efforts, Bateman was chosen for the National Inventors Hall of Fame in February 2005, joining an exclusive club that numbers fewer than 250 of history’s most prominent inventors, including aviation pioneer Elmer Sperry. The team’s innovations help prevent controlled flight into terrain and have been credited with saving thousands of lives.

Mergers were the order of the day in the 1980s as the essential elements of today’s Honeywell began to come together. Garrett AiResearch merged with Signal Oil and Gas to form Signal Companies, which later merged with Allied to become AlliedSignal in 1985. Meanwhile, Honeywell acquired Sperry Aerospace in 1986, becoming a world leader in airborne electronic systems overnight. Honeywell Aerospace continued to contribute to the US space programme with several systems providing guidance, control and communications for the new Space Transportation System, better known as the Space Shuttle, which flew for the first time in 1981. Among other contributions, Honeywell developed the multiplexer-demultiplexer and dozens of components that were used to guide and control the engines, aero surfaces and steering mechanisms on the shuttle.

Flight safety advanced in the 1990s with the development of the EGPWS, a significant step forward from the original GPWS developed in the 1970s. The system was combined with a worldwide digital terrain database and relies on Global Positioning System (GPS) technology. GPS technology came into its own in the mid-1990s with the introduction by Honeywell of the first hybrid Global Positioning System/Inertial Reference System (GPS/IRS), which was designed to take advantage of the long-term stability of GPS and the short-term stability of the IRS. Honeywell also pioneered the use of Differential GPS as a landing aid, becoming the first company to certify a Satellite Landing System.

A new Honeywell Aerospace entered the new millennium with one of the aerospace industry’s broadest and strongest portfolios of technologies, systems, products and services and a reputation for developing innovative solutions that meet customer needs. Honeywell’s IntuVue, the first complete 3D picture of airborne weather conditions, was developed in 2008. IntuVue introduced volumetric scanning techniques to search the sky from the ground to 60,000 feet, enter that information into a database and then provide a three-dimensional glimpse of the weather.

Connectivity became a Honeywell watchword in the 2000s as aircraft operators, flight crew and passengers demanded seamless, high-speed in-flight communications. Honeywell Aerospace responded by acquiring EMS Technologies in 2011 and entering an agreement with Inmarsat in 2012 that made the company a leading force in the evolution towards the fully connected aircraft.

Now and the Future

Some of the most innovative and productive companies that the aerospace industry has ever seen, have come together during the last century to form today’s Honeywell. Almost everything has changed since Lawrence Sperry’s historic flight in 1914, but one thing hasn’t: Honeywell Aerospace’s commitment to apply industry-leading technology to create solutions for customers and make the world a better, safer, more productive, more efficient and more comfortable place.

Led by Tim Mahoney, President and CEO, Honeywell Aerospace headquartered in Phoenix, Arizona, has annual sales of $12 billion. It employs 38,000 at nearly 100 worldwide locations. It is a leading global provider of integrated avionics, engines, systems and service solutions for aircraft manufacturers, airlines, business and general aviation, military, space and airport operations. The primary focus of Honeywell Aerospace is to use its unique capabilities in avionics, flight safety products and systems, propulsion engines, wheels and brakes, auxiliary power units and its aftermarket service and support to enhance customer value by making flight safer, more reliable and more cost-effective.