The Competition Commission of India approved acquisition of entire shareholding in AirAsia India by Air India. 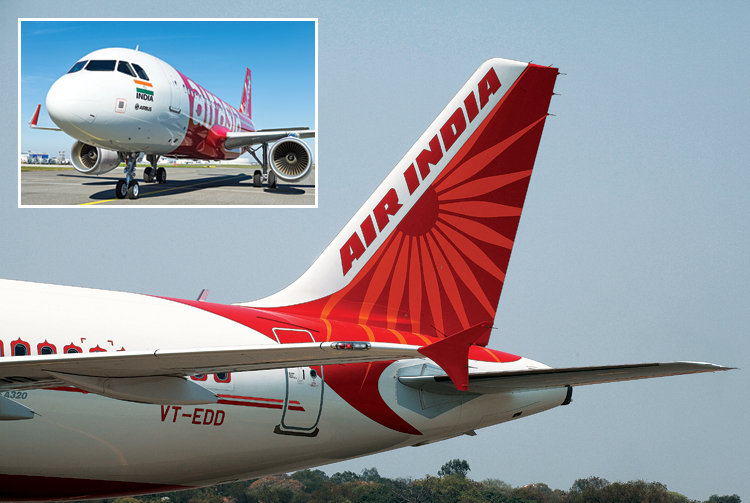 Air India and AirAsia India (inset) combined entity will have a 15.7 per cent share of India’s domestic passenger market

In April this year, Air India had submitted a proposal to the CCI for acquiring AirAsia India. Competition watchdog CCI’s approval is needed for deals beyond a certain threshold. At present, TSPL holds 83.67 per cent of the equity share capital of AirAsia India which operates under the brand name “AirAsia”.

The official statement also underlined, “AirAsia India is a joint venture between TSPL and AirAsia Investment Limited (AAIL) with TSPL presently holding 83.67 per cent and AAIL (part of Malaysia’s AirAsia Group) holding 16.33 per cent of the shareholding.” With such a large share, Tatas already held a strong say in running the airline.

AirAsia India does not provide scheduled air passenger transport services on international routes. It is engaged in the business of providing the following services:

AIL, along with its wholly-owned subsidiary, Air India Express Limited (AIXL), is primarily engaged in the business of providing:

The Tata Group has been putting in constant efforts to expand its operations in the Indian aviation industry. Last year the group had announced the increase of its stake to about 84 per cent in the budget carrier, AirAsia India.

The approval comes about six months after the government transferred the ownership of Air India and Air India Express to Tata Sons. On January 27, 2022, Tata Group announced the completion of the transaction for purchase of Air India from the Government of India. “The Tata Group takes over management and control of the airline, starting today,” the company had stated in the press release. Interestingly, Air India was founded by the Tata Group in 1932, before it was nationalised in 1953. The group has evinced interest in acquiring the airline on multiple occasions earlier as well.

The Government had then also released the statement informing that the Air India strategic disinvestment transaction had also completed with Government receiving a consideration of 2,700 crore from the Strategic Partner (Talace Pvt Ltd, a wholly owned subsidiary of Tata Sons Pvt Ltd), retaining debt of 15,300 crore in Air India and AIXL and transferring shares of Air India (100 per cent shares of Air India and its subsidiary AIXL and 50 per cent shares of AISATS) to the Strategic Partner.

The approval comes about six months after the government transferred the ownership of Air India and Air India Express to Tata Sons.

Tatas had earlier remarked that the recent deal would not cause a change in the competitive landscape nor will it have any adverse effect on competition. But the airline is still likely to encounter certain overlaps in their domestic passenger and cargo services along with charter flights.

What is further interesting to watch is that Tata also operates the Vistara airline in partnership with Singapore Airlines owning a 51 per cent stake in the full-service carrier. So, Tata Sons’ endures four airlines Air India, Air India Express, AirAsia India and a majority stake in Vistara. Air India and AirAsia India combined entity will have a 15.7 per cent share of India’s domestic passenger market. However, Air India Express doesn’t have domestic flights, and the remaining three together have domestic market share of 21 per cent. And CCI’s approval has further enhanced the chances of “the salt-to-steel conglomerate” consolidating its four aviation entities.

Ever since these talks started last year, there had been predictions that Indian airlines industry is heading towards consolidation. The Directorate General of Civil Aviation (DGCA) had stated earlier that if the Tatas bag Air India and eventually consolidate their aviation interests, their likely domestic market share would be about 23 per cent, making it a formidable number two in the Indian aviation market. In one of its reports earlier, aviation consultancy firm, Centre for Asia Pacific Aviation (CAPA) India had also highlighted that the Indian airlines industry is heading towards consolidation and it could result in a 2-3 airline system in the near to medium term.

Though the integration of Vistara’s business with Air India is likely to take time as negotiations are dependent on several factors, the overall consolidation itself depends the COVID-19 situation, routes available, the balance sheets, agreement with the Singapore Airlines, the government, etc. If the consolidation takes place, the Indian aviation can transform from a six-player industry to a four-player one comprising the Tatas, IndiGo, SpiceJet and Go Air. “A strategic consolidation among Indian airlines is inevitable and could result in the total number of airlines coming down from six,” CAPA India had stated.

Tatas are also likely to exploit the opportunity to gain monopoly on international routes. Ever since Jet Airways ceased operations, the space for an Indian carrier remains significantly absent in the international routes. However, Jet is also gearing up to return this year and it will be interesting to see how the new dynamics take off.

The past record of Tata’s in aviation industry brings some optimism for the company’s plans. The Tatas’ aviation history can be traced back to more than 80 years ago. From Tata Airlines and the long-since nationalised Air India to strategic joint ventures with AirAsia Berhad and Singapore Airlines for AirAsia India and Vistara, respectively, Tata has had a constant presence in the aviation sector. These recent happenings direct Tata Group towards a significant position in the aviation landscape in the country.