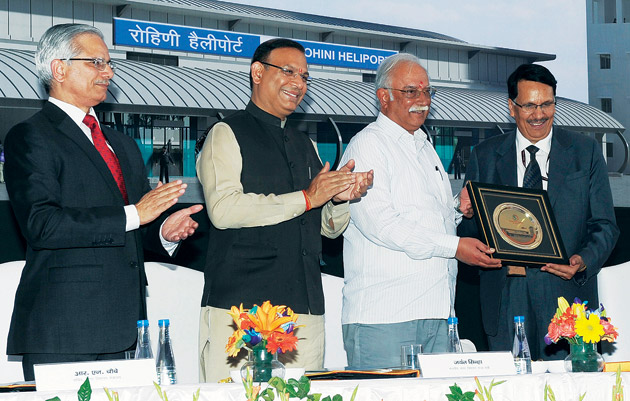 Union Minister for Civil Aviation P. Ashok Gajapathi Raju at the dedication ceremony of the first Integrated heliport to the nation at Rohini Heliport, in Delhi on February 28, 2017. The Minister of State for Civil Aviation Jayant Sinha and the Secretary, Ministry of Civil Aviation, R.N. Choubey are also seen

Helicopters have been around in India for a long time, but they have always grown in the shadows of other types of aircraft, be it a commercial airliner or a private aircraft. In fact, the growth has been woefully poor compared to the potential it has. One of the major hindrances in their growth has been the lack of proper infrastructure for the rotary-wing segment.

While the helicopter can land and take-off from a small piece of land or from a large rooftop adding to its versatility, for regular operations, it requires proper infrastructure for the segment to grow in an organised manner. One of the key essentials for the growth of the helicopter segment is the existence of heliports and that concept never existed in India, till recently. A heliport is by definition an area of land, water or structure used or intended to be used for the landing and take-off of helicopters and includes its buildings and other facilities. In other words, it is a small airport suitable for use by helicopters and some other vertical-lift platforms. Designated heliports typically contain one or more touchdown and lift-off areas and may also have limited facilities such as for storage of fuel, refuelling of helicopters and hangars for maintenance. In some larger towns and cities, customs clearance facilities may also be available.

Features of the Rohini Heliport

This was woefully missing from the Indian aviation scene. However, on February 28, 2017, India finally got its first heliport at Rohini in New Delhi. The Rohini Heliport was formally inaugurated by the Minister of Civil Aviation (MoCA), P. Ashok Gajapathi Raju. The heliport has provisions for operational facilities and maintenance, repair and overhaul (MRO) as well. The heliport has the following facilities:

The Rohini Heliport can be used for 25 operations so far by various operators. It is the first integrated heliport which is expected to further boost the plans of the government to increase remote and regional connectivity through air.

Inaugurating the heliport, Gajapathi Raju said that the heliport was an excellent infrastructure but pointed out that helicopter services in India are still at a nascent stage. The facility will keep the cost under control as MRO facility has been incorporated. This would also help in job creation.

Raju also said that his Ministry has made a request to the Lt Governor of Delhi as well as the Delhi Government for providing Pawan Hans Limited., the adjacent two hectares of land for setting up helicopter pilots and an AME training centre to meet the growing demand for such professionals.

The Minister of State for Civil Aviation, Jayant Sinha, said that the aviation sector is making history almost every day and that the heliport is one such event. He said that the facility will be useful in providing medical emergency services, public safety and enhancing tourism. Sinha said that helicopter services could become economically viable if the prevailing 25 per cent tax on aviation turbine fuel was reduced.

Four Heliports Across the Country

The Secretary for Civil Aviation, R.N. Choubey, said that it is part of the National Civil Aviation Policy (NCAP) to have four heliports, one in each region and Rohini is the first step. He also said that helicopter operations could be shifted from the Indira Gandhi International Airport (IGIA) to Rohini. The heliport was completed in almost two years time at a cost of nearly Rs. 100 crore. This heliport will provide all helicopter operational facilities and will decongest the busy IGIA and also promote regional air connectivity through helicopters in the northern part of the country for regular passenger services, heli-services, landing and parking of helicopters, MRO services for helicopters, disaster management, Helicopter Emergency Medical Services (HEMS), law and order surveillance.

Pawan Hans — The Key to Development

Pawan Hans has also prepared a road map to connect all the major destinations from this heliport such as to Shimla, Haridwar, Dehradun, Mathura, Agra, Meerut and industrial hubs such as Manesar and Bahadurgarh. They will provide air connectivity between Delhi and neighbouring cities from the heliport. With the heliport commencing operations, regional connectivity will become easier from the capital to neighbouring areas.

Pawan Hans had successfully carried out trial sorties from the heliport in February last year and had planned to go for full-scale helicopter operations from May. The commencement of services from here is also expected to reduce congestion at the Delhi airport, which currently handles about 50 helicopter arrivals and departures on an average per day besides the large-scale fixedwing operations, the Chairman and Managing Director of Pawan Hans B.P. Sharma said.

Pawan Hans is working on its business diversification and has devised a Strategic Plan 2020 according to which company will be diversifying into small fixed-wing and seaplane operations, MRO and development of helipads and heliports. It is working to develop four ‘heli-hubs’ in line with the concept of ‘airport-hubs.’ These helihubs will be a one-point solution for the helicopter business and will act as a heliport for public passenger services, MRO facility for helicopter maintenance and also as a skill development centre for training of pilots, aircraft maintenance engineers and technicians. 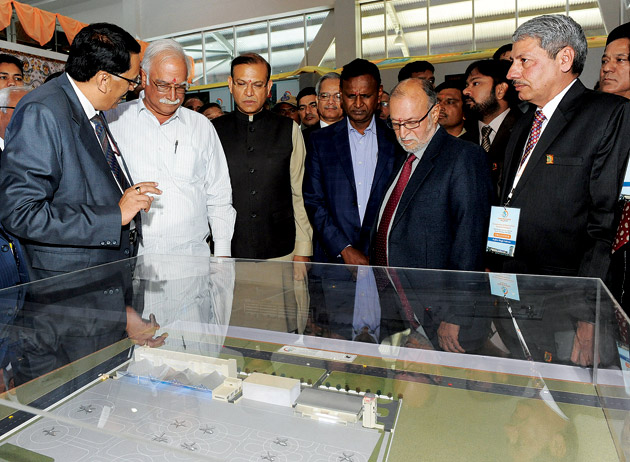 Union Minister for Civil Aviation, P. Ashok Gajapathi Raju watching the model at the dedication ceremony of the first integrated heliport at Rohini Heliport in Delhi on February 28, 2017. The Lt Governor of Delhi Anil Baijal, the Minister of State for Civil Aviation Jayant Sinha, the Secretary, Ministry of Civil Aviation, R.N. Choubey and the Member of Parliament Udit Raj are also seen.

In the NCAP, there is provision to develop four heli-hubs in the Northern, Southern, Western and Eastern regions and Rohini is the first off the block. The MoCA has launched a Regional Connectivity Scheme under NCAP which inter-alia permits helicopter operation only among the states of Jammu and Kashmir, Himachal Pradesh, Uttarakhand, North-eastern region of India, Andaman and Nicobar Islands and Lakshadweep Islands.

The government will promote helicopter usage in the following manner:

A beginning has been made to develop the rotary-wing segment in an organised manner and it is now for the industry to rally around such efforts by utilising the heliports and heli-hubs which are soon going to dot the nation.