With the changes in taxation policy, India’s MRO industry for the first time will be able to see light at the end of the tunnel 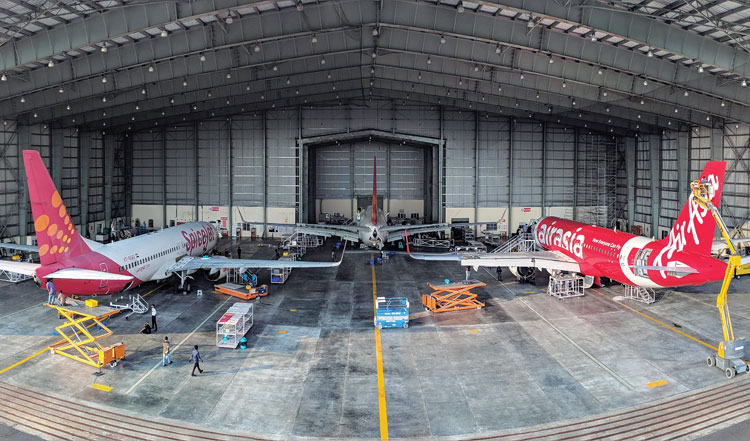 Air Works MRO Facility: An MRO ecosystem needs to be established near large airports in India

The current market size of the Maintenance, Repair and Overhaul (MRO) industry in India which is assessed at about $700 to $800 million, is expected to grow at 7.7 per cent annually over the next decade. This is more than three times the global rate. The demand is being driven by a fleet growing at 9.9 per cent annually to a projected figure of over 2,300 in FY 2040. Indian airlines will become the third largest buyer of commercial passenger planes in the world, only behind the United State (US) and China. The growth is also being boosted by the expansion and development of new airports, fast expanding Low Cost Carriers, a liberal Foreign Direct Investment policy, increasing adoption of new technology and focus on regional connectivity.

Despite an increasing fleet, the MRO industry continues to struggle for relevance. India needs to build a robust domestic MRO ecosystem. There are about 40 overseas entities approved by the Directorate General of Civil Aviation (DGCA) to conduct MRO on India-registered aircraft which in itself accounts for over 90 per cent of the MRO of the Indian carriers. According to the Economic Survey for 2019-20, the annual import of MRO services by Indian carriers was around 9,700 crore. “With airlines fleet growing annually by 100, the size of domestic and imported Indian airline MRO is set to grow annually to 21,600 crore in the next five years and to 36,000 crore once the fleet size reaches 2,000 aircraft,” the Survey said.

It is not easy to wean away Indian carriers from their well-established MRO service providers outside India. It has to be a three to five year mission, involving continuous dialogue between central and interested state governments, DGCA, Airlines, Original Equipment Manufacturers (OEMs) and the MRO industry. Airlines in India typically spend about 12 to 15 per cent of their revenue towards maintenance, which is the second highest cost item after fuel. Generally, airlines carry on-tarmac inspections (A and B checks) in-house and work with third-party MROs for engine, heavy maintenance (C and D checks) and modifications. Nearly 60 per cent of the MRO expense is on engine and component repairs, which India needs to focus on.

In order to build an MRO ecosystem in high-tech domain such as engines and avionics, there could be additional incentives provided for MROs investing in these categories

With the prevalence of sale-and-lease-back model among Indian carriers, redelivery maintenance forms a major part of an airline’s and lessor’s MRO requirements. This presents a good opportunity for both component repair and heavy maintenance. Currently, this is done mostly outside India, due to various legal and technical reasons.

The Vision 2040 for MRO industry as envisaged for India is as follows:

In March 2020, the Government of India took a decision to reduce GST rate on MRO services in respect of aircraft from 18 per cent to five per cent with full Input Tax Credit and to change the place of supply for B2B MRO services to the location of recipient. This change is likely to assist in setting up of MRO services in India. Domestic MRO will also get protection due to five per cent tax paid under section 3(7) of the Customs Tariff Act, 1975 on most imported goods (sent abroad for repairs) as this tax is not available as credit. The industry had long been demanding a reduction in GST rates for a level-playing field vis-a-vis overseas MRO companies, who are taking away almost 95 per cent of the domestic business due to lower taxes.

Airports in India charge royalties on the invoice value of MROs, over and above the space rentals that MROs pay to the airport companies. This is a violation of Clause 18B (f) of the National Civil Aviation Policy 2016 that stipulates removal of all such royalties and add-on costs for a five-year period. The said Clause needs to be enforced with immediate effect. 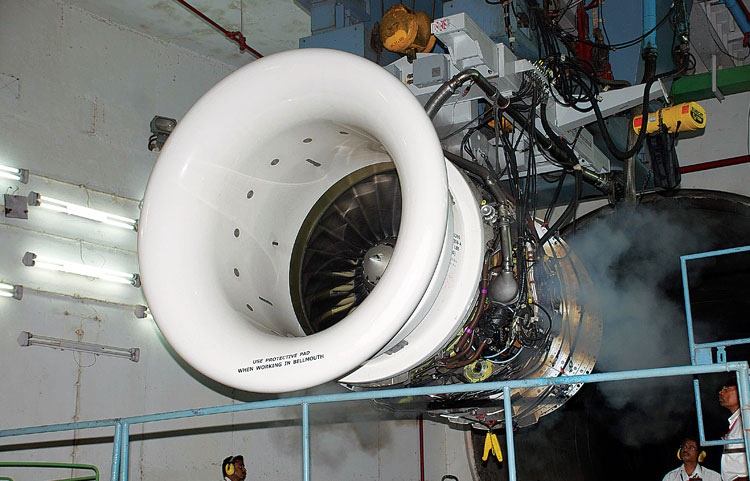 Airlines will need a complete MRO ecosystem in India in order to switch from their current service providers. The MRO ecosystem includes repair shops for airframe, engine and components; component suppliers, warehouses and training facilities. The entire MRO zone should be notified as an SEZ and subject to zero taxation on all MRO activities. If there is a continued push for tax and procedural reforms, aircraft servicing in India can be 20 to 25 per cent cheaper than its competing nations. It will help transform the stagnant Indian MRO industry from mere line or base maintenance providers to value providers.

The government may now seriously consider restricting airlines from taking Indian aircraft abroad for repairs, except in cases where the infrastructure and technical knowhow is not available in India. Such a restriction may be applied five years after the tax anomalies are removed, giving ample time to develop the MRO eco-system in India.

Components, tools, test benches and consumables related to MRO should be subject to immediate clearance by Customs without any harassment and delays. The Illustrated Parts Catalogues issued by OEMs should be treated as adequate proof of the genuineness of the aircraft component. Any violation by an MRO entity should invite cancellation of license and appropriate penalties to serve as a deterrent.

An MRO ecosystem needs to be established near large airports. Several busy airports such as Mumbai are already congested. This creates an opportunity for state governments to create an incentive package over and above the central package and attract large OEMs or MRO providers to their state. The UP government has actively been pursuing setting up of an MRO hub with the Centre as a competitive domestic MRO industry, which will cater to both civil and military aircraft. The Uttar Pradesh government is in talks with the Centre for setting up two MRO hubs — one in Jewar and the other in Meerut.

The UP government is in talks with an American and a French company regarding setting up of MRO facilities. Both the companies are ready, but have been asking for incentives such as GST relaxations. For this, the Government of India needs to tweak its policies on MROs. "If we these incentives are not provided, they would rather go to Sri Lanka and Singapore,” State Investment, Export Promotion and MSME Minister Siddhartha Nath Singh said. Without divulging the names of the companies, the Minister said that while the MRO in Jewar will cater to bigger aircraft, the facility in Meerut will cater to smaller ones.

Poor quality of training infrastructure is one of the major disadvantages of Indian MRO sectors.

In order to build an MRO ecosystem in high-tech domain such as engines and avionics, there could be additional incentives provided for MROs investing in these categories. MROs and component warehouses need to be declared as free trade zones with zero rate of GST and a ten-year holiday on corporate tax, capital gains tax and dividend distribution tax. Disrupting existing relationships between Indian carriers and foreign MROs will not be easy. Some incentives such as capital subsidy and interest subsidies to attract investments need consideration.

MRO manpower costs in India are said to range from $30 to $35 per hour. This is almost 60 per cent cheaper than in Western Europe or the US, but comparable to wage rates in China or Indonesia. India also has a vast talent pool, whereas developed countries are facing a dwindling availability of high-quality engineering talent, apart from an ageing workforce. However, in India an increasing trend is that aerospace engineers are choosing to work abroad, many even being poached from Indiabased carriers. To address this, MRO companies are working with educational institutions to guide graduates towards the aerospace sector and also institute after-graduation employment programmes.

Poor quality of training infrastructure is one of the major disadvantages of Indian MRO sectors. The quality of institutes and technicians for MRO work approved by DGCA is poor. They need retraining every two years. For Indian companies to enter into highly regulated international market, India needs an approval from a recognised aviation regulatory body such as the European Union Aviation Safety Agency (EASA). Only ten per cent of the MRO business is handled by Indian MROs. The DGCA is making efforts to streamline its licensing procedures similar to that of the EASA by entirely changing AME licensing as module system. Implementation of new DGCA regulations by training schools and its effectiveness in improving quality requires a long-term observation by industries to gain confidence.

The airlines have now been burdened with additional tax liability of five per cent on receipt of services from foreign MROs. The additional liability has arisen on account of deeming the place of supply of these services performed outside India as the location of the recipient i.e. location of domestic airlines receiving the services. The dependency on the foreign MROs shall continue till the domestic MROs industry catches up with its foreign counterparts in terms of size and competence. The apprehension in the minds of the flyers would make it very challenging to restore the growth of the industry to the pre-pandemic position.

LIGHT AT THE END OF TUNNEL

Announcing measures to boost the country’s domestic aviation sector, Finance Minister Nirmala Sitharaman on May 15, 2020, said that steps would be taken to make the country a hub for MRO. “Not just civil aircraft but military aircraft can also benefit from the MRO if we make India a huge hub. Maintenance cost for all airlines will come down and that again will have a ripple effect on passengers. Travellers can probably pay less after that,” she said. The announcement was made by the Finance Minister as part of the fourth tranche of stimulus measures to boost the economy amid the corona virus pandemic. With changes in taxation policy, India’s MROs for the first time will be able to see light at the end of the tunnel. Significant Capital Expenditure coupled with additional policy alignment is still required. As these issues are gradually addressed, MROs in India may finally take off.